A REAL EXPERT ON RETAIL CONSTRUCTION!

The Lombard Company has an extensive amount of experience building retail work. From new construction to renovation, our goal is to keep your project on track to open on schedule, or remain open through remodeling, with quick turnaround capabilities and careful attention to detail. The Lombard Company would be happy to work with you as the general contractor on your next project and is certain you will be more than satisfied with the results.

This Aldi project was a 16,210 s.f. retail building that included extensive site work and development of an adjacent parcel for Discount Tire. The site work included installation of an underground storm water detention system manufactured by Storm Trap.

The project also required improvements and expansion of Cass Avenue.

With a day care center north of the project, a school to the east, and a bank to the south, The Lombard Co. safely constructed this project and was considered a “good neighbor” by the adjacent property owners. 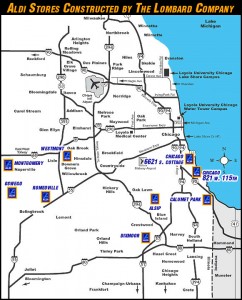 The Lombard Company was happy to complete the project on time for the new ALDI shopping center. The architectural firm was OPN Architects of Cedar Rapids, Iowa. This site presented challenges due to existing contaminated soil conditions that required extensive environmental remediation. 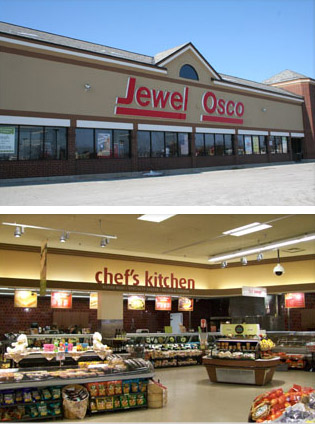 This $2,000,000 project involved major remodeling and upgrades throughout the store. The work included installing energy efficient equipment in the bakery, deli, meat and fish departments along with a frozen dairy case. There were also major improvements to the store lighting which created a more enjoyable shopping experience.
All work was done in an open store environment without inconveniencing shoppers. 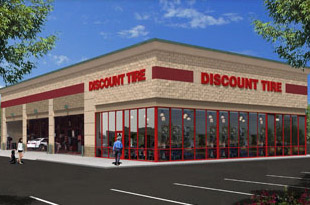 Discount Tire company is one of the largest tire retailers in the United States. Lombard’s reputation was one of the reason they were selected for this project. The new 9736 square foot facility and associated site work involved much work and was completed during a tough Chicago winter.  Despite the weather, the project was completed on schedule.

When Wal-Mart sought to add a new 7,200 square foot seasonal center constructed in 60 days or less, they needed a reliable general contractor who could get the job done right and on time.
The Lombard Company was awarded the job in early October, and worked in conjunction with the store manager, tradesmen and Village of Bolingbrook officials. The Lombard Company was able to meet the aggresive project schedule just in time for Thanksgiving, the store’s busiest holiday weekend. The project included a new outdoor garden center, parking lot modifications and landscaping – all completed while Wal-Mart remained fully operational.

The Lombard Company developed and built the 33,000 square foot retail shopping center located in Willowbrook. The center was in a mixed use development that included two retail buildings. The design and construction complimented adjacent pond and residential areas.